Treatment options for prostate cancer depend on the stage at which the cancer is at.

It may include surgery, radiation therapy, hormonal therapy and others.

Some prostate cancers are discovered at an early stage, and they are slow-growing. In such a case, treatment may cause more harm than good, so doctors will recommend a more conservative approach in the form of active surveillance or watchful waiting.

This method involves regular check-ups and visits to the doctor. Tests done during these visits can include PSA blood tests, MRI scans and prostate biopsies. Through this monitoring, doctors will be able to monitor cancer and intervene early if needed.

In the case where cancer grows and becomes more aggressive, the doctors may recommend treatment with the intention of curing cancer.

Watchful waiting is a different form of monitoring prostate cancer which has yet to develop symptoms or cause problems. For this method, long-term observation and monitoring of the cancer is done, with the intention of avoiding treatment, and intervention is only done when necessary. This is usually the approach taken for patients with a shorter life expectancy because of advanced age or other serious medical problems.

Watchful waiting involves check-ups which are less frequent than active surveillance. If symptoms arise, treatment will be done only to alleviate the symptoms, rather than to cure cancer.

Surgery is a common treatment method for early-stage prostate cancer that is limited to the prostate. The main type of surgery done is a radical prostatectomy. This procedure involves the removal of the entire prostate gland and some surrounding tissues, including the seminal vesicles.

Radical prostatectomy can be carried out through several approaches:

Radiation therapy (radiotherapy) uses high-energy rays to destroy cancer cells or prevent them from growing. This method of treatment is often used in men with early-stage prostate cancer that has not spread. It may also be used for some men with locally advanced prostate cancer, or in older patients to avoid the risk of surgery.

There are 2 main forms of radiation therapy used to treat prostate cancer:

Depending on the type of cancer, one will be given either form of radiotherapy or a combination of both.

In this form of treatment, a machine located outside of the body is used to direct rays onto the area affected by cancer, which is usually the pelvis for prostate cancer.

Before the treatment begins, the patient has to undergo a CT scan of the pelvis to locate the prostate gland exactly. This will ensure that the beams are aimed as accurately as possible, to minimise side effects in other parts of the body. (IMRT — intensity-modulated radiotherapy)

Treatment is usually given 5 days a week for a period of 7-8 weeks. It is similar to getting an x-ray, but the radiation dose is higher and the procedure is painless.

EBRT can also involve various techniques such as:

Side effects of EBRT

Do note that these are just common possible side effects but it is not an exhaustive list!

Most of the short-term side effects can be treated with medications or therapy and will go away after a few weeks.

Brachytherapy is also known as internal radiation therapy, where sources of radiation (seeds) are inserted into the prostate.

Brachytherapy can be given in 2 forms:

Side effects of brachytherapy are similar to that of EBRT 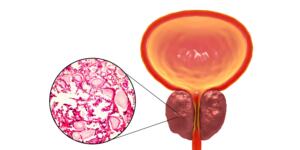 Prostate cancer growth is mostly driven by male sex hormones (known as androgens), so androgen deprivation therapy (ADT) is used to lower levels of testosterone[1] in the body. Hormonal therapy is most commonly used to treat cancer that has metastasised (spread). It can be used to control cancer but is not a cure for prostate cancer.

Hormonal therapy is often used alongside EBRT (a form of radiation therapy), to treat locally advanced prostate cancer, as it gives the highest chance of curing it.

There are two main approaches to hormonal therapy, orchidectomy and medical castration.

Orchidectomy is the surgical removal of the testicles, which is an organ in the male reproductive system responsible for producing sperm and testosterone.

The procedure is performed while the patient is under anesthesia, and the scrotal sac (sac of skin hanging outside the body in front of the pelvis) is left intact. It is considered a safe, minor surgery, but the patient’s fertility will be permanently affected.

Side effects of orchidectomy:

Medical castration refers to the use of drugs to limit testosterone levels in the body. There are several types of drugs that can be used for this approach.

Estrogens (female hormones) can also be used as a form of ADT, but they are not preferred due to the side effects (i.e. blood clots, breast enlargement). They can still be used if other forms of hormonal therapy are ineffective.

Side effects of Hormonal Therapy

As male hormones have many functions in the body, there are a number of side effects that could arise from hormonal therapy.

Aside from the main types of treatment mentioned above, here are some other forms of therapy used mainly for more advanced stages of cancer.

Chemotherapy is a form of treatment which makes use of drugs to control cancer. It is not a standard treatment for early-stage prostate cancer, and is unlikely to cure cancer. However, it can be used if cancer has metastasised and the patient does not respond to hormone therapy. Recent research has also shown that chemotherapy can be helpful when used alongside hormonal therapy.

Chemotherapy drugs are usually given through a vein (IV) in cycles and over a period of time to allow patients to recover from the effect of the drugs.

In most cases, standard chemotherapy treatment begins with docetaxel, combined with prednisone (a type of steroid drug).

This is a form of treatment that attacks the cancer cells or environmental factors which help them grow and survive. Targeted therapy aims to block the growth and spread of cancer while minimising damage to normal cells. As not all tumours are identical, the doctor may run some tests to identify the most suitable treatment for each patient. Targeted therapy is also mostly used for advanced-stage cancer.

A type of targeted therapy used is known as PARP inhibitor, which makes it difficult for cancer cells to repair damaged DNA, leading to cell death. This includes:

Side effects of PARP inhibitors: (do note that this is not an exhaustive list)

Immunotherapy is a form of treatment that makes use of the body’s natural defenses to fight cancer.

Sipuleucel-T is a type of cancer vaccine which boosts the immune system to help it attack prostate cancer cells. It is adapted for each patient by taking a blood sample that is then sent to a lab.

This vaccine is an option for people with metastatic castration-resistant prostate cancer with few or no symptoms, and who have not undergone much chemotherapy. It has not been shown to cure cancer, or prevent it from growing, but has been shown to lengthen the patient’s life by a few months. Common side effects of this vaccine include:

During a prostate biopsy, a grade is assigned to the two areas that make up the most of cancer, ranging from 1-5, with 1 being cancer with looks a lot like normal prostate tissue, and 5 being cancer that looks extremely abnormal.

Most cells that have been identified as cancer cells would start from a grade of 3.

When the two grades are added together, they will form the Gleason score. Clinically in practice, 6 is the lowest Gleason score for cancers.

Then, cancer will be put into grade groups based on this Gleason score:

The Gleason score can then indicate how aggressive this form of cancer is, so if the patient has a higher score of 8-10, then the cancer is more aggressive and likely to spread.

Prostate-specific antigen (PSA) blood test, is a test that is done to measure the levels of PSA, a type of protein found in normal cells and cancer cells. It is not a specific test for prostate cancer, but high readings for PSA may indicate the presence of prostate cancer.

PSA readings can also be used to measure the progression of prostate cancer after treatment has started. It can provide an indication of the extent of the disease when combined with TNM classification.

What you Should Know about UTIs

Human PapillomaVirus (HPV) and its link to Cervical Cancer

Can Urinary Stone Disease Be Prevented?

Should I Be Concerned About Blood in My Urine?